Early morning 8th August a juvenile Night Heron, also known as Black-crowned Night Heron flew over low over Lea Farm Lake towards Dinton Pastures, but could not be found. Being crepuscular – active at twilight, it was probably heading to an unknown roost.

2 days later a local resident sent Fraser Cottington a picture of a ‘small heron like bird’ in the pond behind their house on the Western fringes of Dinton and the bird is immediately recognizable as a Night Heron, the story emerged that it was photographed by them on the 6th August, so local bird watchers are now frantic to track it down to see this very rare species, having only ever been seen three previous occasions.

The search continues and last night (10th), hopeful locals we treated with a consolation sighting of a Short-eared Owl flying over at dusk, a very uncommon bird indeed and especially now, as all previous sightings are in the winter, the last records being 9th Nov 2014 and prior to that 15th Nov 2005. 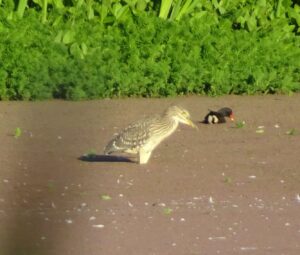